What was supposed to be a long, 3-day weekend of quilting turned out not to happen.  Mr. T's 92-year-old aunt passed away on Saturday, so we had to drive to Louisiana for the funeral, which was this morning.  I took along my farmer's market hexies and did lots of basting and stitching during the 10 hours of driving over two days. 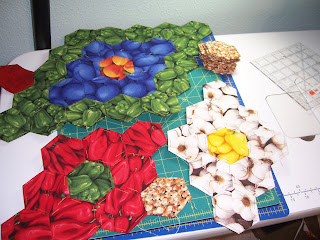 I finished the large green, blue and orange block before we left.  The blocks will be joined with dark red hexies.  I stitched one of them to the green to see what it would look like.  The smaller, unfinished blocks were basted, then stitched together in the car while listening to an audiobook of The Amateur Marriage by Anne Tyler.  It sure made a long, boring drive go much faster!
Posted by Laurie @ ... And In My Spare Time I Quilt at 10:22 PM