I was fortunate to be able to go on two retreats over the past two weekends.  Each was at a different place -- Cutter's Paradise in Royce City and Quiltagious Quarters in Celeste.  They are both very nice retreat centers and the groups were so much fun.  I even got a lot of work done.

I have been working on Bonnie Hunter's Orca Bay quilt since she first announced it as a mystery quilt.  I had never done a mystery quilt and just decided to try it.  Her first comment in the first posting (which doesn't seem to be up anymore) was "no whining."  That should have been a clue.  This quilt is full of little pieces, hundreds of little pieces, thousands of little pieces!  I have great admiration for anyone who actually completed it in the 7 or 8 weeks of the mystery.  I fell behind quickly and still haven't caught up -- but two retreats have helped me make a significant dent!

Over the past few months, I had already assembled several components of the quilt.  I had made the blue string blocks: 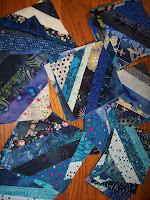 and the Ohio stars: 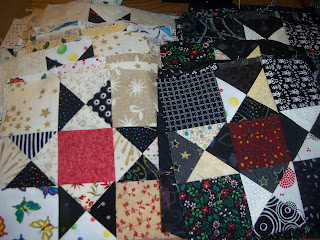 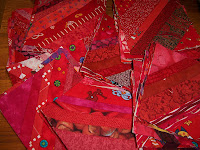 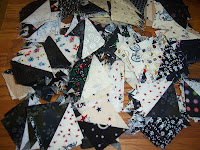 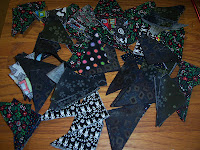 During the second retreat, I started assembling all those half-square triangles with the single triangles into black and white flying geese blocks: 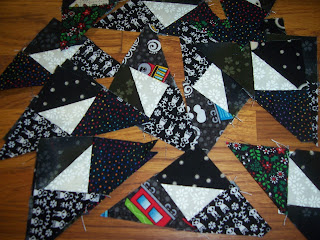 Those got added to the sides of the red string blocks that had been cut in half (sewing bias edge to bias edge): 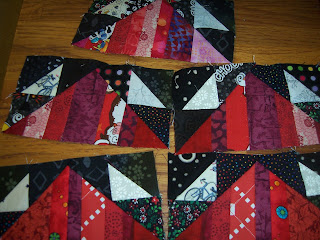 And finally, I began to assemble all the pieces, even though I don't have all the black and white geese done yet.  I had to see some significant progress!

This is two of eight rows completed.  I WILL finish this!  (Dang!  I just noticed two of the blue string blocks going in the wrong direction.  Do you see them?  At least it's not too late to fix it!)
Posted by Laurie @ ... And In My Spare Time I Quilt at 11:27 PM