Not Your Grandmother's Flower Garden

Remember my farmer's market hexies?  You can see where I started them here a year ago, and a little more progress here.  I've been working on them off and on since then.  When the Quilt Guild of Dallas announced that their show theme for 2013 was "Edible," a couple of people said I should enter with the hexie quilt.  I plugged away with that in mind and was at this stage when I decided to enter the show in late February. 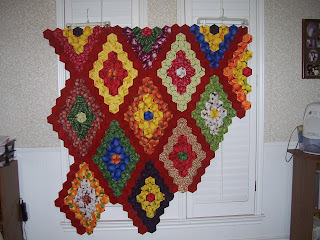 I kept saying, "I'm almost done," but I wasn't!  With the March 6 deadline looming, I stitched more.  I took it to QuiltCon with me and stitched in the hotel room.  I stitched at night while watching TV.  Late on Friday, March 1, I stitched the last corner medallion in place and thought I was ready for the borders.  But it needed one more outer border of red hexies, so I plunged ahead.  It took me all day Saturday until about 2 a.m. Sunday morning to finish that hexie border.

I had planned to border it in red but while I was at QuiltCon I realized I wouldn't have enough, so I searched for and found a nice avocado green and a nifty diagonal stripe for a border.  I got the borders sewed on on Sunday and pieced the back.  Two days to go until it absolutely had to be done and it still needed to be quilted.  So I took off work on Monday and Tuesday to quilt and bind it.  I sewed on the label and hanging sleeve at small group Tuesday evening.  I finished it just in time to take it to the Dallas Market Hall on Wednesday morning.  Whew!

Thursday was preview night.  I decided to go see the quilts in relative peace, even though I plan to also go on Sunday with some friends.  When I finally found my quilt, what did I see but a ribbon!  My last minute quilt had won an Honorable Mention in the Show Chair's Theme category!!  Not bad for my first ever quilt show! 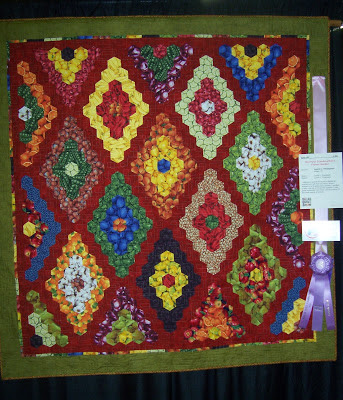 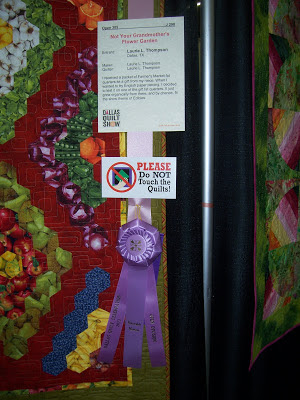 Not Your Grandmother's Flower Garden
70"x72"